Well, my laptop went tits up a couple weeks ago. Thankfully, it was still under warranty. Two motherboards, one CPU, and one Video Card later, we are up and running today. So, I would just like to take a minute to wish everyone a belated Merry Christmas.

I got some sweet swag for the holiday. My loot tally included a DVD of Rambo, a copy of A Farewell to Arms, a copy of The Complete Short Stories of Ernest Hemmingway, a Copy of Soul by Seal, a copy of Neon Bible by Arcade Fire, and some clothes and cash.
Posted by The Renaissance Man at 11:25 PM No comments:

The greatest individual trophy in sports, the Heisman Memorial Trophy, will be awarded in a little less than two days. The three finalists are already in New York. Sam Bradford, the quarterback for Oklahoma, is my pick to take home the stiff arm. He's competing against last year's winner, Tim Tebow of Florida, and the popular Colt McCoy of Texas.

I personally believe that Sam Bradford has a much stronger case than either Tebow or McCoy, given that Bradford is the best player on the number one ranked team at the time of voting. Bradford also enjoys a significant statistical advantage over the other QBs. Bradford has more yards from scrimmage, more TDs, and a higher passer rating than either of his opponents. McCoy has a higher completion percentage, and Tebow has fewer turnovers, but the overall statistics clearly give Bradford the edge. Bradford had the best performance, while playing on the #1 team. Seems like a no brainer to me.

But as always, there is dissent in the mainstream media. Here are a few examples.

Chris Low, SEC blogger for ESPN.com, puts forth this article. He stumps for Tebow based on the argument that Tebow faced much tougher defenses. This might be true, however, he makes several mistakes. First off, he makes the mistake of using raw defensive rankings. This is a problem because it gets you into a chicken/egg argument very quickly as to why scores are so low in the SEC. Do the offenses struggle because of powerhouse defenses, or are the defenses being inflated by offenses the likes of Auburn and Tennessee? Just as QBs like McCoy or Bradford might make a defense look silly, so to do Jonathon Crompton and Kodi Burns make even the most pathetic defenses look like the 1985 Bears. The other mistake he make was claiming that Arkansas was the worst defense Tebow's faced this season. I guess he thought the game against the Citadel was just a scrimmage. That's OK, he wasn't the only one...

In defense of McCoy, Jeff Martin of the Kansas City Star claims that, "Twisted Logic will rob McCoy of the Heisman!" I find this piece hilarious, because the only twisted logic in the article is his case for McCoy. He starts out by dismissing Tebow with this quote,

Tebow is a great college football player. Every television talking head said as much over the weekend. But how can you give him the Heisman a year ago in large part for his statistical achievements — the first I-A player to finish with more than 20 passing touchdowns and 20 rushing touchdowns in a season — and then turn around a year later and twist the criteria? Now it's about who is most valuable to his team?

So we're going by performance, rather than value to team. That's OK, I can dig it. But then it's down to Bradford vs. McCoy, and Mr. Martin goes all M. Night Shyamalan on us, and brings out the twist!

McCoy and the Longhorns took the Red River Rivalry, 45-35, even though Bradford had the far loftier statistics, not to mention the superior offensive supporting cast.
Maybe this is being too simplistic, but McCoy did more with less all season long, which is why he was No. 1 on my ballot and Bradford was No. 2.

OK... So he's going one of two ways here. Either he's claiming that McCoy deserves it over Bradford because he won the head to head matchup of the teams, or he's completely reversing tack on his argument against Tebow, simply to justify McCoy winning. In the event of the former, it shows a tragic lack of understanding of the nature of the QB position and the sport in general. If it's the latter, then he's a hypocrite who laughably accuses hypocrisy to be the reason why what he believes is right might not occur. Either way, I would expect more out of a major city newspaper sports journalist.

All rhetoric aside, we'll find out which argument was the most persuasive at the Heisman ceremony on Saturday.
Posted by The Renaissance Man at 1:53 PM No comments:

While dropping my sister of at the U in Seattle after her Thanksgiving visit, we stopped for an early dinner at Blue C Sushi in the University Village. What ensued was a rather unique dining experience.

Blue C operates on a conveyor belt. They have the food laid out on color coded plates, ranging form $1.25 for the greens, to $5.25 for the dark blues. The food sits on this conveyor belt and scrolls around the place, passing by each table, where the customers can grab it at their leisure. Soy sauce, wasabi, and ginger are siting at the end of each table. At the end of the meal, you add up the plates on a scorecard, and that becomes your bill.

The food is decent. There's Sushi, some cooked dishes, and some vegetarian dishes, but if you don't like Sushi, you'll find eating at Blue C to be difficult. However, if you are a sushi fan, or at least find it edible, then Blue C will be an enjoyable experience for you. The seared tuna is delectable. They've got the standard set of drinks, a functioning bar, and the obligatory sake 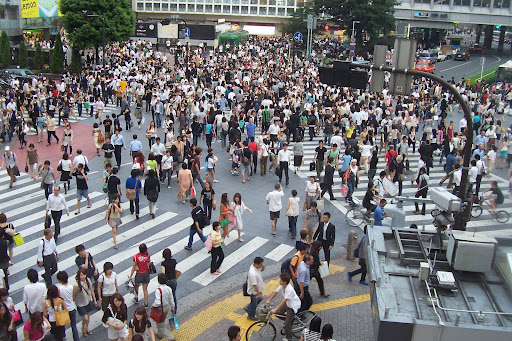 menu, which allows you to quench the fire of the spicy salmon rolls.

The ambiance is solid. The layout is fairly open, and the walls are dominated by either large picture windows, large pictures of the iconic Tokyo Square crosswalks, or large televisions showing bits of Japanese life. The music is forgettable, and the din of the crowd usually drowns it out. The service is a little detached, as it's basically a moving buffet.

To get the best out of Blue C, bring a crowd. Each plate comes with 4 sushi rolls or 2 sushi slices. With more people, you can get more variety out of your meal. It's a little slice of Tokyo Chic in Seattle, and it's a 8/10.
Posted by The Renaissance Man at 12:49 AM No comments: