Well, the Pac 10 just shot itself in the foot. 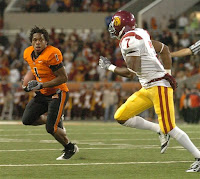 But MAN is it fun to be the one to pull the trigger! Oregon State has upset the number one ranked team in the nation, and suddenly restored hope to what looked to be a very looong season. The way that Riley pounded the running game out of the ace set seemed like he actually reads my blog.

But as I look back, I notice trends that begin to make me realize that my earlier concerns might have been ignorant in the face of the standard Oregon State modus operandi under Mike Riley. Since the beginning of Riley's second stint as head coach in 2003, Oregon State has been a collective 12-13 for the first 5 games of the season, 0-7 on the road in those games. The Beavers have then closed out a respectable 27-11 for the remainder of the season.
In the last two seasons in particular, this is evident. Both seasons began 2-3, and ended 10-4 and 9-4 respectively, with the Beavers winning a bowl game and finishing the season ranked. The strong finish in 06 was keyed by a win over then #3 USC. In 07, defeating #2 California started up OSU's push to the finish.
This season began 0-2, with both losses coming on the road. It remains to be seen if the upset of #1 USC will signal the start of a blazing run to the end of the season. I certainly hope so, and if it does, this loss will look a lot less damning on USC by the time the Bowls roll around.
The only problem this sort of system brings up is the fact that any seasonal ambitions are scuttled from the get go, and for a school like OSU, which doesn't usually have the luxury of a high preseason ranking, getting embarassed in an early road game on national TV also guts the opportunity for decent media coverage for most of the season.
But with next weeks game against Utah, and the eventual showdown with the Ducks at the end of the season, OSU has positioned itself nicely to begin to undo the damage of the slow start to it's image. Hopefully, the early upset means that the strong finish gets started early. If we could end the season 9-4 or 10-3, it'd do wonders for the program.
Posted by The Renaissance Man at 10:44 PM